This year end review for 2016 and the start of 2017 is to establish what has been done at Nature’s Way Medicine so far, declare plans, and predict what we can expect. 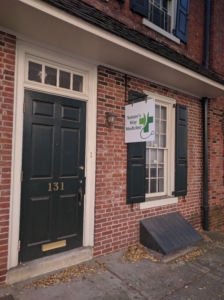 The clinic opened October 1st, 2015 and like any new business required adjustments after the start. Because of that, I like to think 2016 was really the first official year of the clinic and with that in mind, we can consider the progress so far.

Financially, the business is still spending as much as its making, if not more. The early investments into the practice are now being paid off and the interest rates truly are hard to keep up with. On top of that, the business expanded across state borders into Philadelphia, where our second clinic was established in the heart of Philadelphia’s Old City. An additional rent plus supplies has cost the business more than expected and since the program there is so new, patients are deferred for later in the year when their expectations can be met more appropriately.

Still, the clinic has effectively doubled its potential patient pool by expanding to a new state on its first birthday last October. I would say that is definite progress. Also, though the spending is increased and investment costs are high, patient appointments have slowly progressed in frequency. We have been getting follow-ups now, as well as new consults and we are beginning to find trends in the practice that have been both positive and unexpected based on the literature that is out there, which is basically none that is clinical.

Almost all of our chronic pain patients have decreased their opioid use and prescriptions. Literally, there have only been 2 that have stayed at the same dose.  Literally, that is close to a 98% frequency of success in lowering opioid use with the use of medical marijuana. In traditional practices, that is unheard of. Most practices go up in opioid use because of resistance to their effectiveness and physician hesitation to lower doses against patient wishes.  Nature’s Way Medicine has proven that medical marijuana is a gateway drug. America has a narcotic problem like never before seen and the only way out is through marijuana treatment. For this reason, we call medical marijuana a “Gateway Out” drug.

Other successes have included effective seizure control through substitution of AEDs (Anti-Epileptic Drugs) with medical cannabis use. Patients have stopped Dilantin and Keppra and Valproate, some have stopped two or even three of their seizure medications just by using medical marijuana. One huge difference between this group of patients and those with chronic pain has been the strains they prefer. Their preferences are associated with best disease control while limiting the amount that they get high. Some, need to be high all day long. Others, try to do this less by choosing low THC and high CBD strains, or using the medicine in doses reaching the threshold of symptom control but lower than is needed to be stoned. Their are trends occurring without medical recommendation and only through patient preference, so clearly the medicine’s effect varies between the disease being treated and strains used.

Cancer patients have had astounding results. This group has shown the most promise in marijuana treatment than even the pain group. Marijuana for many of these patients is meant only to be a symptom reliever, not to treat the underlying neoplasm. Yet, cancer progression has generally slowed in many of these patients based on imaging and rates of metastasis. This is not true of every patient, but some have shown such degree of improvement in the cancer that it should promote vigorous research into the field. The fact that I have seen a stage IV metastatic colon cancer in the liver and lymph nodes become untraceable on PET scan and MRI is a medical miracle. Doctors are baffled. Even more confused are the hospice care workers who are witnessing patients improve over time to the point of no longer meeting criteria for hospice since the patients are spending too much time shopping and enjoying themselves.

And of course, there are the primary care patients we care for. These patients have been satisfied with their care and appreciate a different approach by the doctor. Without insurance demands, there is time to speak to them and like a counselor affect them through conversation in a positive direction. Higher office visit fees are countered by savings on unnecessary testing and over-medication (polypharmacy). By listening to patients, asking precise questions, and then sharing the options available provides the patient autonomy and the right to control their medical care as well as inform the doctor which tests, if any, are required to protect the patient from missed diagnoses. This way, the doctor can choose not to order testing and if any is helpful or urgent, the patient chooses the approach to care. Of course, some patients want to be told what to do and trust the doctor’s judgment while assuming a passive role. That’s fine too, but overall the cost of care to the patient as well as to the public has been a fraction of usual spending in America. This achievement is actually more important than the adoption of marijuana because it proves a sustainable cheap method to healthcare in an otherwise unsustainable industry on the cusp of collapse.

Right off the bat, there will be appointments available in Milton, DE for patients that have been traveling over an hour to see Dr. Roman, America’s medical marijuana doctor, or Dr. Turgeon, the most experienced medical marijuana psychiatrist to date. Dr. Turgeon will remain seeing patients in Wilmington but all non-PTSD patients living in southern DE now have the opportunity to be seen close to home.

Over the coming months Dr. Roman will be replaced by a different physician so his work there will be only temporary while the new clinic becomes independent. Doctors working at Nature’s Way Medicine clinics will be trained to understand and practice the integration of medical marijuana and traditional care by Dr. Roman himself. This will ensure consistent quality and ethical practices at all our locations and maintain the gold standard of allopathic marijuana care set by its founding principles. Through collaborative efforts, this will continue to evolve into the most optimal and cost-efficient practices for patients’ quality of life.

There’s a lot more to say about our achievements in 2016 and as usual, creating content is taking longer than expected as memories return to mind while writing this. For that reason, we will have to wait for the 2017 forecast at least one or two more blog entries. More needs to be appreciated about the business’s first year in another post so stay tuned for that, and then we will talk about 2017, which is juicier than its preceding year’s successes.

Our social media presence is rather pitiful and part of that is the hesitation of our fans to share our links and posts and tweets and pages so they don’t appear supportive of marijuana to their other contacts like their parents, bosses, and coworkers. We get far more support privately than publicly and we hope that our fans can push our content on social media more bravely because that would change the attitude that being open about marijuana is okay to do and the new norm. But more importantly, sharing this on social media would inspire me, Dr. Roman, to write more original content like this. Anyone can re-post others’ content to masquerade as a source of news/information but taking the time to write something like this takes experience and knowledge that gives those other pages something to post about.

If I had more online support, I would be inspired to take the time out of my busy workday and produce more content for the public to learn from. This is all just the tip of an iceberg. Please share this, like it, and comment so revealing the rest feels more rewarding and less like a chore to keep Google happy.