The Tale of Captain Kirk’s Edibles 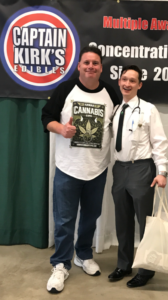 At the World Medical Cannabis Convention last month, I was on an opioid panel that included one patient liaison by the name of Captain Kirk Reid, known for the famous Captain Kirk’s Edibles bearing his name. He serves an example of narcotic addiction and dependence, but also recovery and bravery.

The Captain has had a long history with opioids. He told stories of looting pharmacies as an adolescent and later becoming hooked on poppy derivatives. Like many others, his life spiraled out of control eventually landing him in the hospital from an overdose.

Thankfully, he made it and pulled himself together to fight his addiction using cannabis. Life threw him another curveball when he was struck with a serious illness progressively taking its toll on him. Multiple sclerosis is known to be especially severe in men and Captain Kirk has again been challenged with painful afflictions as a result of this disease. Even more than ever before, he continues to exemplify courage to others by using medical marijuana as a substitute for the pain pills that once enslaved him.

Cannabis has been a part of Captain Kirk’s life since his recovery from addiction. His appreciation for the drug and culinary arts combined to form a brand now known as, Captain Kirk’s Edibles. Winner of multiple HighTimes Cannabis Cups for best edible (a.k.a. medible), he now helps patients treat themselves with pastries from his own delicious recipes. Check out his articles so that you too can use them in the kitchen, assuming you are legal to do so in your state!

Check out Captain Kirk’s Edibles facebook page and check out his trophies. He is a soldier in our battle against medical marijuana prohibition and deserves our praise.