When Nature’s Way Medicine first opened in 2015, I was skeptical of topical medical marijuana. It did not occur to me that cannabinoids could cross the skin. My appreciation of their analgesic [pain-relieving] effects were mostly centered around a central desensitization of pain nerves. The resetting of hypersensitive nerves back to their default activity was the mechanism for Mary Jane’s pain effects.

Immediately into my career as a marijuana physician, patients reported benefitting from cannabis salve sold at the Delaware dispensary. After applying topically, it reportedly alleviated their joints during flair-ups. Since then, I’ve uncovered another method by which cannabis relieves pain: It is a strong anti-inflammatory agent. Like other agents that decrease inflammation – such as corticosteroids and NSAIDs – marijuana controls pain because it cools-down inflamed joints.  The patients were simply reporting this effect on their osteoarthritic knees, rheumatic knuckles, and chronic degenerative disc disease.

Topical forms of marijuana can have different degrees of strength. This is usually something to consider to prevent under-medicated topicals rather than vice versa. The type of topical medical marijuana bought influences its potency, irrespective of concentration. Usually ointments are stronger than creams. Here’s a summary of some of the forms topical medications can be applied in:

In short, ointments are more medical and the primary form of topical medical marijuana.

Here are some examples topical medical marijuana has been useful, based on my clinical experience and reports from patients.

Pain is the most obvious symptom benefitting from topical medical marijuana treatment. Over the years, my work as a marijuana physician taught me to appreciate a variety of pain types that are treatable with topical cannabis cream/ointment.

Medical marijuana ointments deliver cannabinoids to the skin and local tissues, including large joints affected by osteoarthritis. While systemic forms of marijuana may be a primary approach to treatment, applying a topical medical marijuana treatment is a more suitable option when psychoactive effects are undesirable. Rubbing marijuana ointment on the body has little systemic absorption and thus doesn’t cause patients to be high from using it. This also makes it a great first-choice option for patients just discovering a curiosity about cannabis.

Inflammation from autoimmune diseases – like psoriatic arthritis – is also decreased, soothing musculoskeletal pains by THC’s CB2 receptor activity and effect on immune cells. Marijuana salves and oils can be used for massage to expedite relaxation of tense muscles and diminish discomfort felt at tender sites of the body. These are new fields of study for some of our most cutting-edge scientists and clinicians of today.

Neuropathic pain is also settled with the use of cannabis ointments. Topical medical marijuana treatment has been helpful for diabetic neuropathy, like that which is felt in the toes after years of high blood sugar. Patients can rub this on in the beginning of the day and before bed to relieve the stinging pins-and-needles. A cream may be more suitable but ointment has been used under dressings with great results in a couple of my patients.

Especially notable is the use of topical medical marijuana ointment to treat the neuropathic pain experienced from shingles. This happens from reactivation of dormant chicken-pox virus as an adult and affects a specific nerve’s skin distribution, called a dermatome.

Traditionally, this is treated with steroids to help limit long-term sometimes permanent pain after the rash has disappeared. Using cannabinoids topically, almost a dozen Nature’s Way Medicine® patients in Delaware and Pennsylvania have found relief by applying topical medical marijuana ointment. Studies should be conducted to determine if this would also decrease incidence of permanent post-herpetic neuralgia. Pain control has been demonstrated in this prior study, so there is no reason for physicians to wait before implementing topical cannabinoids into their clinical medical practices.

Topical medical marijuana creams and ointments are a suitable treatment for some types of rash. By subduing the immune system, rashes caused by inflammation or allergic responses can be relieved after applying topical medical marijuana. Examples include contact eczema and even sunburn. Some of the therapeutic properties have been found to be independent of CB1 and CB2 receptor binding, the usual mechanism of activity.  There is a lot to be learned from this.
Finally, ointment emollients can assist our skin’s healing of small cuts and irritations, like those experienced from shaving. With more research, topical medical marijuana could prove useful for preventing infections seeding from cracks in dry skin, like diabetic ulcers that often lead to a need for amputation. 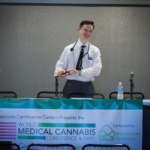 Educating The Community by Sharing Online

If you can relate to this, there is good news- Readers have full permission to share this article to anyone they please.